Hydrocotyle leucocephala inhabits wet and marshy habitats from northern Central America to southern South America. Owing to its ease of growth and suitability as an aquarium plant, it has long been common in the hobby and may be obtained from a wide variety of sources. It has no widely used synonyms in culture.

H. leucocephala has alternate leaves that form along a creeping stem from which its half-dollar sized and shaped leaves appear. It is one of the easiest plants in cultivation and is suitable for almost any aquarium. It isnï¿½t at all picky about light or carbon dioxide levels and will do well in tanks where many other species donï¿½t. Warm temperatures are not a problem, making it suitable for planted discus tanks. Its leaves tend to turn yellow along the edges with insufficient iron, but that is easily remedied with the addition of a micronutrient supplement containing iron. Although it will do well in less than optimal conditions, H. leucocephala absolutely thrives and reaches its highest potential when light, carbon dioxide and nutrients are in abundant supply. Emersed culture is rarely a problem and is very productive.

An interesting fact about H. leucocephala is that it is edible. The leaves have a slight peppery taste and are used as a spice and even the basis for a soda in some parts of the world.

As with its cultivation, propagating H. leucocephala poses no difficulties. Its growth is rapid and side shoots are produced frequently.

H. leucocephala is a versatile plant in terms of its use in an aquascape. Its vine-like growth can be allowed to intertwine with driftwood and mid-ground plantings to good effect. Alternately, it can be trained to grow along the bottom by weighting down the stems, planted like a stem plant and grown vertically, or be allowed to trail across the surface. While it goes well with almost any other plant, it is an especially suitable companion for Anubias species due to its similar demands and bright green coloration.

This product has a minimum quantity of 10

The tea tree oils’ so shiny shampoo is formulated with deeply p.. 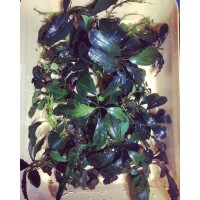 Assorted Bucephalandra Pack of 6 PlantsAll are submerged grown an..